My Long Hiatus is Over!

In May I started this blog. I literally knew nothing about blogging. I started with a free WordPress site, and within a month I bought myself a new iMac, learned about web hosting, made business cards, and launched Earthybeautyblog.com. I tested so many different beauty products, and would tell all my friends about them, a blog just made so much sense; the next step in getting my views out there. However at the same time I was going through a family crisis.

My grandmother was diagnosed with stomach cancer at the end of April. They diagnosed it as Stage 3, and there wouldn’t be much the doctors could do. She was given 6 months to live. She tried going on a very light dose of chemo just to see if the tumor in her upper stomach would shrink, so it would be easier and more comfortable to eat. After 3 doses and no results, she decided to stop with the Chemotherapy. I was actually very happy she chose not to continue with chemo. It seemed like with older patients with stage 3-4 cancer, chemo only shortened the time they had left. Most of the time chemo leaves the patient with 0 immune system, and within weeks they get sick, it turns into an pneumonia and they are gone. If my grandmother only had 6 months, I wanted to enjoy that 6 months with her.

In 2013 my grandfather passed away. She had missed him dearly. Sometimes I would be on the phone with her and she would just start crying, “I’m ready to go and be with Lenny.” She was very depressed for over a year after he passed. When she got this cancer diagnosis, she accepted it very quickly. She wanted to stay here for as long as God would allow her, but she wanted to be with my grandfather. She wasn’t scared, she was at peace with her life and how it would end.

I was working on this blog while she was going through her chemo, and it was a great distraction for her. My grandma told me that I should test products for eyebrows and promote it to woman who lost their eyebrows after undergoing chemotherapy. I thought it was a great idea for cancer awareness month. Plus she didn’t really like my job bartending at night, so the potential to make money off of blogging was something she really supported.

Throughout my life, my grandmother and I were extremely close. I would call her every day and tell her everything that was going on in my life. If I had a problem I called her, if I tried a new yoga class I would tell her about it, no details were spared. Sometimes I would give her too much information about fights with my boyfriend, or things clients said at work, but overall she loved talking to me. At the end of July my grandmother became weaker, and she told everyone she would be gone by August 6th. I spent as much time with her as I could at the end of July and beginning of August. She was BARELY eating, I mean my mother and I were lucky if we could get her to eat two spoonfuls of soup and a sip of water all day. But somehow she made it through. She passed August 6th, and a week later a miracle happened. She started eating again and gaining strength. She even started eating SOLID FOODS, something she hadn’t done for almost 2 months! It seemed like things were turning around, and she might make it longer than we were all expecting.

I’m so glad she made it, because on August 18th I found out I was pregnant. Usually people keep it a secret for a few months, or at least until their first ultrasound. But my first Doctors appointment wasn’t until September 12th at 8 weeks along, and I couldn’t wait to tell her. My grandmother was the first person I called and told the news too.

I remember when she answered the phone she said “I told you not to call, I’m too weak and not in the mood to talk.”

“But grandma it’s important!” and I spilled the beans.

She was very happy, she thought having a baby would change certain parts of my life for the better and give me purpose. I asked her if I should wait to tell my mom, but she told me to tell her right away. My mom was actually over my house that day, so it made telling her really easy. My mom was also excited although she responded “I wasn’t ready to be a grandmother yet.” Her sister was a grandmother at 40, and my mom is now 58, come on your not THAT YOUNG to be a grandmother!

A few days later after telling my grandmother the news I went to visit her. We told my two aunts and the mood was great. But things turned very quickly.

At the beginning of September my grandmother stopped eating again. Her great turn-around was short lived. She began getting weaker, and the nurse said it was time to put her on hospice. From that point on she had a hospice nurse with her every day, along with my mother who was taking care of her full time, and my father who was staying with them. My grandmother did not want to be alone, my mom had to sleep in her bedroom with her every night, and when my parents came to spend the weekends with me, my aunt would have to sleep with her. She kept hitting certain points that the doctors and nurses knew she didn’t have much longer. She was connected to a morphine drip, and now was pretty high most of the day.

The next time my boyfriend Steve and I went to see her, she was completely different than the week prior. She had gotten so weak. She woke up and told Steve congratulations, and was excited for him to be a father. Then I asked everyone to step out of the room and told Steve to make sure no one came in. I said my final goodbyes to her, while she was awake and able to have a full conversation. I wrote her a letter and started crying immediately while reading it, even though my intention was to stay strong and not let her see me cry. I told her I was at peace with the fact that she had to go, that I would like her to stay with me for as long as possible, but not like this. Not in the pain she was in, drinking no water for days, starving to death not able to eat. I wanted her here with me, but not like that. She loved the letter I wrote her so much she asked her to read it at her funeral, but I told her that this one would be kept between us and I would write a different but similar one for her funeral. I was the only person she asked to speak, and this woman had her whole funeral planned out including the songs she wanted and when they were to be played; so speaking was a really big deal and an honor. That visit came to a close.

On September 12th I had my first doctor’s appointment and saw the baby for the first time. I texted the photos to her Ipad. I called my mom who was with her, and asked to speak to her to tell her about the appointment. She really couldn’t talk much, but she listened and the few words she did say were enough for me. That was the last time I was able to speak with her. After that she was basically in an unconscious state. The nurses said that she could hear what was going on, and might know whats going on around her, but she was too weak to respond. When they had to turn her over from side to side she would moan in pain, she knew what was happening but she couldn’t do anything but moan. 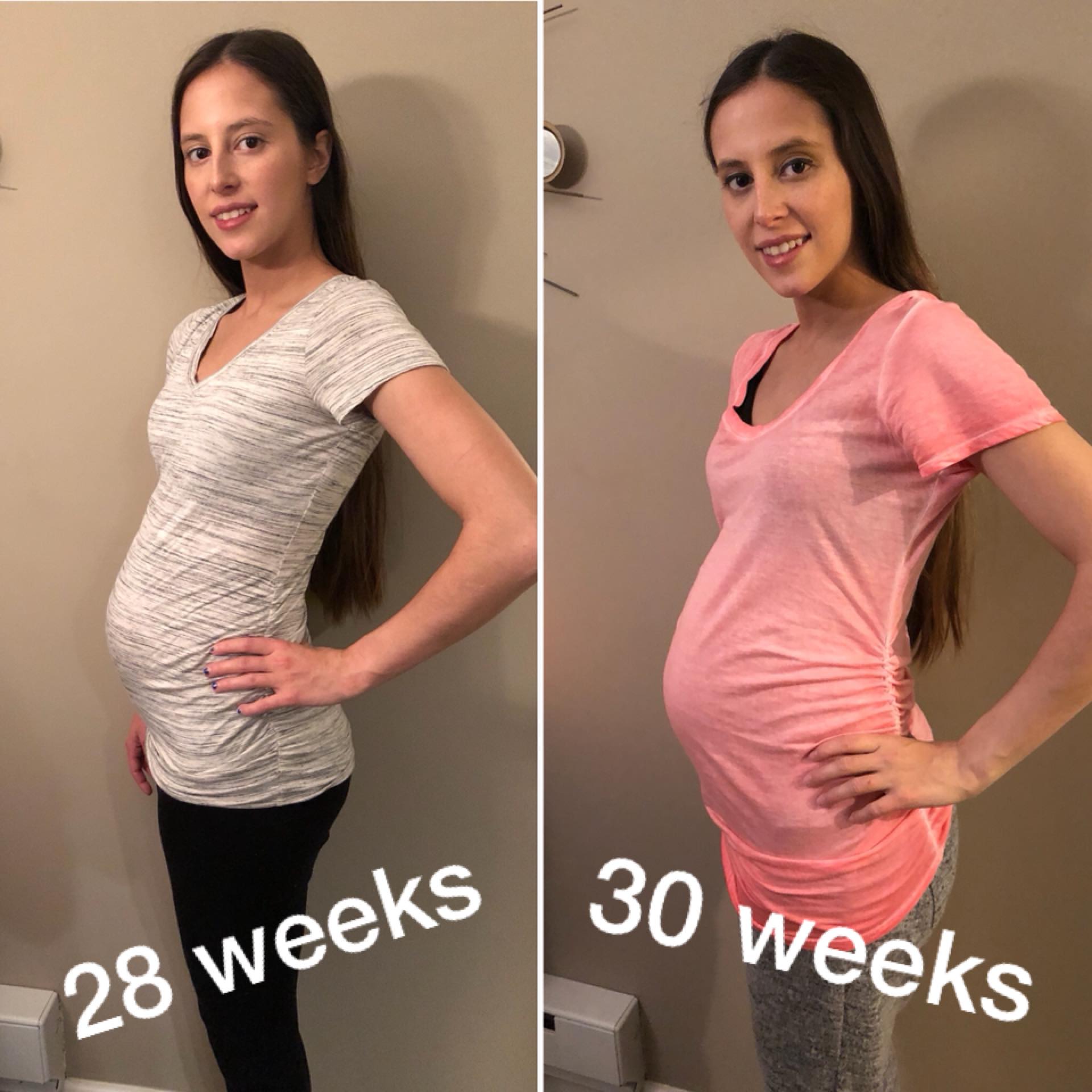 On September 16th at 5AM she passed away. It was her time. She only made it about 5 months after her first diagnosis. I’m so glad I got that 5 months and was able to spend a lot of time with her and talking to her. Now she’s with my grandfather and her mother, with the people she loved and where she wanted to be.

I miss her like crazy. I would always call her in the car on my way home from wherever, after I did something I would call her to tell her all about it. Since I’ve been pregnant this whole time, there has been so many times I got in the car after a doctors appointment and my first thought was I need to call grandma. It sucks not being able to call her and hear her voice, but I know she is here, and there has been doctors appointments I felt her with me.

I am expecting a son on April 24th. I am BEYOND EXCITED but also very nervous. I am currently 31 weeks and have stopped working, so I do have some time to blog before the baby comes. I have been trying a lot of new products, and found a few things I literally can’t live without. Not only will I continue to blog about beauty products, but I will add a Mom category and talk about some products that are working or not working for me throughout those early stages of motherhood. I will be posting twice a week for now, I will definitely have to take a little break after my son is born, and then we will see what my schedule will be like after.

If anyone has dealt with a recent loss, or is going through a pregnancy you can leave a comment and I will respond. If you need any advice I will give the best advice that I can give.